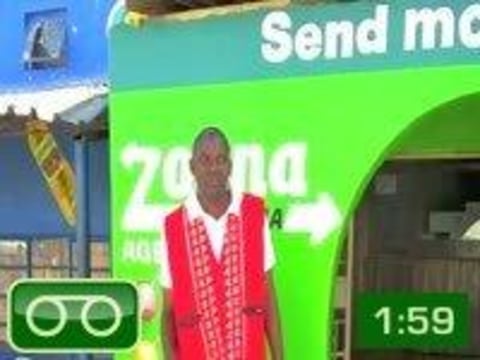 A loan helped To open another mobile money shop.

Mundia is 48 years old. He is married and has six children who are all in school. He runs a mobile money transfer business in his hometown of Mongu, where he is fondly known as The Pioneer. He has been running this business since 2009 and It is his only source of income. Having attended his primary, secondary and college education in three different provinces, he can speak five local languages. This, he says, will be invaluable as he goes about his expansion plan. Before he started running his mobile money transfers business, Mundia served his community as a police officer and worked with a local bank as a team sales leader. He describes himself as persistent and hardworking. These qualities have helped him keep running his business. Being one of the first people to start running a mobile money transfer business through Mobile Transactions Zambia (MTZ), Mundia has grown his business from scratch. He recalls that when he first started, he would only have five customers a day, which is a far cry from the 100+ who now transact with him on a daily basis. He has since managed to employ four people who help him attend to customers. Mundia believes that the Kiva loan will help him alleviate his major challenge of having low working capital. He would like to use the money to open more outlets in his province as he is convinced that more people are in need of sending and receiving money instantly and cheaply. His expanded business will help more members of the community access this service. He has high hopes of becoming the biggest Mobile money agent in the western province. Opening up more outlets will give Mundia more profits, which will help him provide a better life for his wife and children. In the video, a representative from Mobile Transactions is interviewing Mundia.