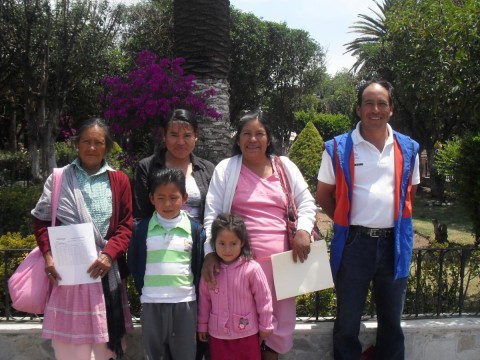 A loan helped to buy chickens and sheep.

The group "Bordados Mazahuas" consists of three hardworking and responsible women and one man. All of them live in the community of San Pablo Tlachichilpa where the residents engage in agriculture. In addition, this region is a Mazahua area. The name was chosen by a person who finally decided to leave the group. This person produced embroideries, therefore the name was created (for the "bordados" [embroideries] produced by Sra. Vicenta and because she is from a Mazahua area).

Doña Soledad says that she is 59 years old. Unfortunately, she is already a widow since her husband died a short time ago. She raises and sells animals, such as chickens and sheep. Doña Soledad has been in this business for 31 years and began working because she wanted to help her husband cover the household expenses such as education, food, shoes, and other needs. Her greatest difficulty is the lack of feed, such as fodder and corn, since these products are very expensive due to drought and the lack of rain required to achieve a good crop harvest. Doña Soledad says that one time she had to withdraw her savings from the bank in order to buy feed for her animals. However, this did not discourage her at all since her goal is to buy a calf that she can keep at her house. Even though her sales have done very well, she still wants a calf. She also explains that a loan has been a great help to her on several occasions when buying fodder, corn, and feed. When she sells, her profits are used to buy food, shoes, and clothing for herself and her daughter who is still dependent on her.

Regarding the other members, they will invest in their respective business activities: • Olivia and Juliana will buy chickens. • Don Mario, the only man in the group, will buy sheep.