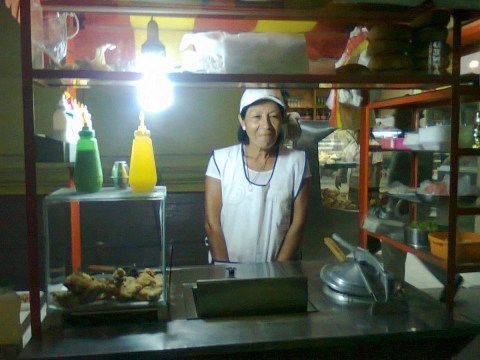 A loan helped to buy handicrafts and a rice cooker.

Betty, 54, is the mother of 3 adult children. Her house is located in the city of Imperial. This is a city that is known for its mild and pleasant weather and also for its agriculture. Betty is a tenacious woman, who most of all has always given 100% to provide for her children. This has been a great accomplishment of hers, and to do it she has always been very optimistic. She put in a lot of effort to start up her business selling handicrafts. Gradually, she started to get ahead, and later she added a business selling cakes and corn pudding. Then, after saving up some money, she bought a food cart and started selling salchipollos (a dish with fried chicken and fried potatoes) and hamburgers. At first, Betty was afraid to go out into the streets to sell her products, because she was a little shy. But she gradually got used to it and lost this fear. After that, when she started selling her hamburgers in the market in her city, it was a bit difficult for her because as she was selling outside, they would not allow her to be there. But she eventually managed to rent a small spot in the market and kept improving her business. She believes that her business is succeeding because she is very hardworking and because she treats her customers in a very friendly way. Betty is very grateful for the Kiva lenders, because thanks to the help that they have provided her with, she will be able to buy handicrafts to sell for Mother's Day. She will also purchase a rice cooker to cook her chicken and hamburgers. This way she will improve her income and will be able to continue working toward realizing her biggest dream: to have her own restaurant.