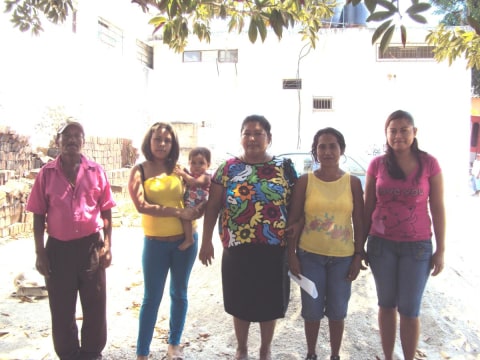 A loan helped to purchase groceries to sell.

This group is called Grupo La 20 and is composed of 5 unassuming, indigenous people who want to improve their life conditions. The members of this group are natives of Pinotepa Nacional, Oaxaca where machetes are made with etchings related to the culture of the region. Another of their handicrafts is the making of traditional clothing. The area is rich in fauna such as the prickly pear, “aguacatillo”, “palmaguapinol”, “caida” and “ámate”. Most of the citizens speak the Mixtec language. One of the members of this group is Sra. Ana Luisa, 20, who is happily married to Sr. Fredi, with whom she has two daughters, Sonia and Analiz. Ana, as she is better known, has been selling footwear by catalog for four years. She has also been selling groceries for one month. She tells us that her store still does not have much merchandise because, as soon as she opened the business, the little merchandise she has she bought from the profits of her shoe sales. Ana says that loans were how she began her shoe selling business. First she bought the catalogs, then she went door to door among her neighbors to offer her merchandise and then she bought the footwear to fill their orders. She realized that she was making a good profit and was selling so many shoes that she decided to buy extra pairs and sell them from her home but she still continued selling to her neighbors and in districts in her community. She is very happy because her earnings help her husband with household expenses and her daughters with their school expenses. Ana says they bought a plot of land in installments so that they could provide an inheritance for their daughters because, with her husband’s earnings they are paying off the land, and her earnings help with household expenses. She requested a loan to purchase more grocery merchandise such as cookies, cereal, detergent, coffee, sugar, milk, vegetables, soft drinks, juices, candy, toilet paper, soap, cooking oil, beans and rice. The other members of the group are Felipa Nery, who sells dough and ground corn, Marbelia, who sells Mexican snacks, Juvenal Adauto, who sells household articles and Berenice Janeth, who also sells dough and ground corn. They thank the Fundación for helping them improve their businesses.