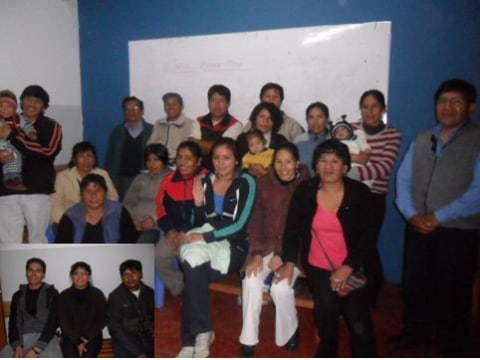 A loan helped to buy merchandise such as blouses, sweaters and skirts for Mother's Day.

A group of friends and neighbors formed the communal bank "Nueva Esperanza" in the city of Cusco. This bank is made up of people who are always seeking new opportunities to get ahead. They work hard each day to provide a better future for their children. They have a variety of businesses, including: food sales, clothing sales, cosmetics sales, grocery sales and candy sales. Other members provide services such as car maintenance and transportation. The member named Marilú is raising her hand in the picture. Marilú was born in Cusco province, and she lives in the same city where she was born. She is 19 years old and is single. Ever since she was 17, she's been selling clothing in a shopping center that is very popular with the residents of the city of Cusco. She started out by borrowing money from her older siblings and from her parents, and in this way launched her business selling clothing. Her business is going very well. She travels to the city of Lima to buy merchandise such as, for example, clothing for men, women and children. She buys clothing according to the season, for example, clothing for the start of the school season, clothing for Mother's Day, clothing for the Christmas holidays, and other holidays. At this time, Marilú needs a loan to buy merchandise such as: blouses, sweaters, and skirts for Mother's Day. Marilú tells us that she is studying for a degree in accounting at a private university, and it is going very well. Marilú's dream is to have her own shopping center and to buy a fleet of long-distance buses. The members of this group appreciate the opportunity that they are being provided, and they pledge to make their payments according to their various payment schedules. (The members that appear in the photo at the bottom arrived late to the meeting.) Cusco is located in the district, province and department of Cusco, in the heart of the ancient city of the Inkas. This city is known for its tourism, its archeological centers, its historic center, its countrysides, its history, and for being an enchanting city in the southern region of the country. Cusco is known for being an area with a lot of commerce and tourism, for its traditional "Inti Raymi" festival, and because it is the gateway to one of the 7 wonders of the world: Machu Picchu.