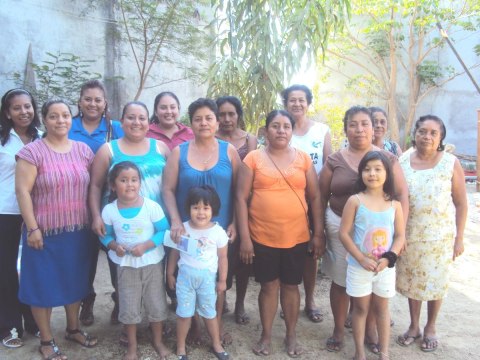 El Manguito Group's loan finished fundraising, but these other borrowers need your support

A loan helped to buy footwear to sell.

This group is called 'El Manguito'. It is made up of 13 hard-working and humble women who have a desire to do well and improve their lives. These women are from Pinotepa Nacional. They say that their community is known for being home to hard-working and humble people. One of the members of this group is 30-year-old Elizabeth who describes herself as a hard-working person who has dreams to fulfill and the strength and ability to do well in life. Elizabeth tells us that she has been selling footwear through a catalog for three years. She also works in a supermarket. She has several customers there as she offers her work colleagues the different styles of shoes that she sells. She also sells her products to neighbors and family members. Her customers recommend her to more and more people and, in this way, both her customer base and her profits increase. One of the things that Elizabeth most likes about her business is that it makes her good profits and she is very successful in selling her merchandise. Above all, there are many offers for her customers and herself. However, there is also something that she does not like about her business. Sometimes her orders are delayed and sometimes they don't arrive in their entirety. This bothers her customers. Nonetheless, she always has extra footwear to show them and they don't get too annoyed. Elizabeth requested this loan to buy more footwear and catalogs so that she can sell both retail and wholesale. She is grateful to Fundación Realidad for helping village women who would like to improve their lives. The other members of this group are: Florencia - who sells Mexican snack food Yerly Edith - who sells clothing Magdalena Luz Gregoria - who sells clothing Lucia - who sells perfume Divina - who sells footwear Francisca - who sells soft drinks Blanca Estela - who sells groceries Isabel Nicolasa - who sells Mexican snack food Abigail - who sells clothing Guadalupe - who makes catalog sales María del Carmen - who sells clothing Luz Belem - who sells clothing They would like to thank Fundación Realidad for helping all hard-working women.