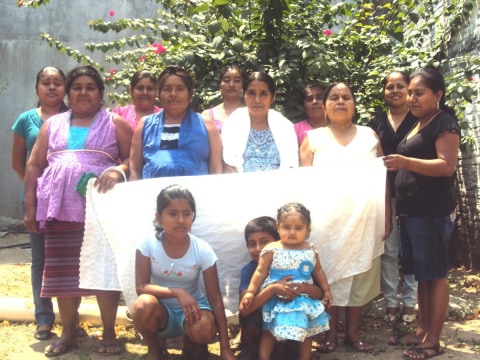 La Playita 2012 Group's loan finished fundraising, but these other borrowers need your support

A loan helped to buy materials to make napkins and tablecloths.

This group is called La Playita 2012. It is made up of 10 hardworking women with a desire to improve their lives. Indigenous women, they all speak the Mixtec language. They tell us they are proud of their language, cultures, and roots. They are natives of a town called San Lorenzo. For them their town is a land of culture, of artistic people, because the majority of the women work selling and making napkins, tablecloths, and huipiles [traditional woven blouses]. Before arriving at San Lorenzo there is a small river, Río de la Arena. There are a lot of green trees and a small temple called Nueva Jerusalén. One of the members of this group is Guadalupe, 25, who is known for being a happy and nice person. She tells us that one of her desires is to improve herself and show the world her culture, her roots, and her language. Lupe, as she is better known, tells us she has worked selling and making napkins for two years. What she likes most about her business is combining the colors while weaving, creating true works of art. Another thing she likes is it gives her good profits. And what she likes least is that her hand tires, and sometimes her vision tires. She tells us she sells her napkins on order because they are commissioned two weeks in advance for birthdays, "quinceañeras" [birthdays for fifteen-year-old girls], and weddings. She requested the loan to buy more materials to make napkins, such as quadrilles, colored thread, silk thread, and hoops. Besides buying her materials to make her napkins, she tells us she is going to acquire other goods because she is going to perform maintenance on her sewing machine. She thanks the foundation for helping the indigenous people who want to improve themselves and make their roots known. The other members are Rocío, who sells perfume; Inés, who sells chicken; Apolinaria, who sells bread; Elena, who sells grocery merchandise; Nemesia, who sells perfume; Verónica, who sells clothing; Ciria, who sells clothing; Celerina, who sells meat; and Catalina, who sells grocery merchandise. They thank the foundation for helping people from marginalized communities.