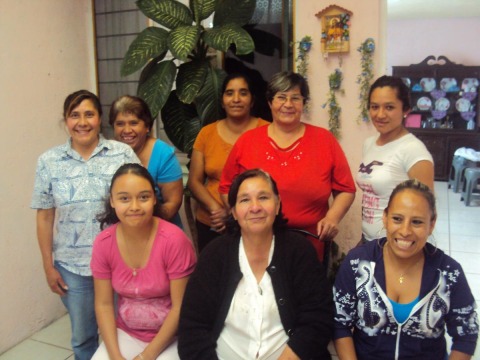 A loan helped to buy cosmetics.

Leonarda, 62, is a very hardworking, cheerful woman who makes all the group meetings pleasant. She relates that she only studied up to sixth grade in elementary school because her parents did not have the resources to send her to school because they were 11 siblings. She is part of the “Las Azucenas de Pueblo Nuevo” (Pueblo Nuevo Easter Lilies) group and they decided on this name because most of the group likes this flower and the other part is because that’s the name of their neighborhood. Doña Leo, like she’s affectionately called, is married and lives just with her husband because all her children are now married. Leo sells cosmetics, perfume and items for the home via catalogue. She’s been in business more than 20 years. She started the business to help her husband cover household expenses and she says that she likes what she does because she’s met a lot of people selling her products. Besides, she has helped many people get jobs through the catalogue cosmetic sales business and that fills her with pride in her work. Leonarda is asking for a loan to buy perfume, cosmetics, etc. because she has pending customer orders that she’s been unable to fill because she’s not had capital to buy them and resell to her customers. Leo’s goal is to set up a stable site to sell because at her age she gets tired going through the streets offering her beauty products. She relates that she’s happy to work with the financial institution because they don’t charge high interest rates. She says that the other group members are called Gabriela, Marisela, Fabiola, María Isabel, Angélica, Irma, Adelina and Jarintzi and they will all invest in their business such as a bakery, a grocery store, clothing for women, men and children, chicken to sell by the kilogram, catalogue cosmetics sales and footwear sales for women, men and children via catalogue.