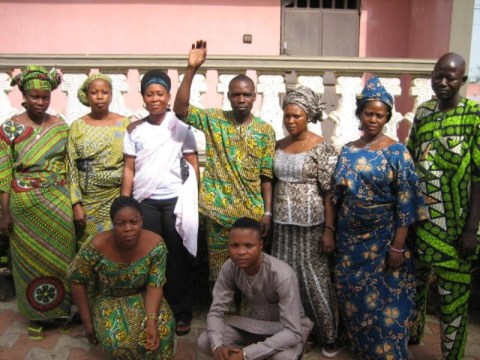 The APCI1 group consists of nine people. All members of the group belong to the same local artisan association. The group's representative, Adéoniran Abdel (raising his hand in the photo) is 34 years old. He is married to a retailer named Ossénantou. The couple has six children in their care, four of whom are their own children. Some of the children attend school. Adéoniran Abdel lives with his wife and children, and takes care of the various household expenses with his wife. Adéoniran Abdel left school at the primary level and learned the trade of hairdressing. In order to cover his various expenses, he has been working as a hairdresser in his region for almost 15 years. He buys his hair styling products in Nigeria. In order to expand his business and to become more competitive on the market, he is requesting a third loan from ALIDé, together with the other members of the APCI1 group. Previous loans have been well repaid.