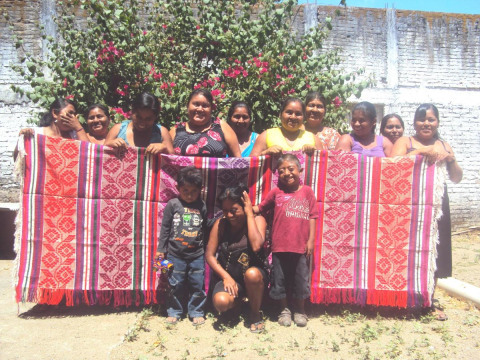 A loan helped to buy ingredients for making food.

This group is called Rancho los Herreros and is made up of eleven women who have different businesses. The group members live on a small rural settlement called Las Herreros, located in a village called Rancho Viejo. In this area there are many papayas and mango trees. One of the group members is Señora Ciria. She is a humble woman of twenty years who sells Mexican foods such as golden tacos, chicken empanadas, tostadas, soups and quesadillas. She tells us that she greatly enjoys cooking and tending to her customers because they love her food. She is happily married to Señor Ermilo, age 30, who sells papaya. They have one son named Pedro Jesús, age 7, who is in the first year of elementary school. She tells us that she will use this loan for the purchase of more ingredients for making tortillas and cheese such as: green pepper, dried pepper, tomato, onion, garlic, cheese, chicken and corn. She tells us that she also embroiders; she makes napkins and cloths for sale. She is very happy to have the Fundacion's support in improving her business. The other group members are: Olga, who sells drinks; Florencia, who sells bread; Febronia; who sells drinks; Paulina, who sells Mexican food; Agustina, who sells drinks; Francisca, who sells bread; Micaela, who sells bread; Carmen, who sells Mexican food; Margarita, who sells fruits and vegetables; and Elena, who sells drinks. They thank the Fundacion for helping humble people who desire to get ahead and improve their children's quality of life.