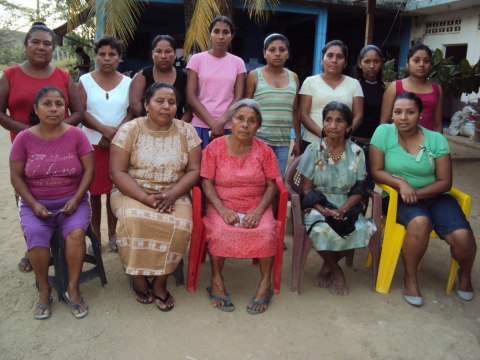 A loan helped to buy ingredients for making food.

This group is called 'Santa Rosa Buena Vista'. It has fourteen members who are all hard-working women. They all carry out different business activities. They are from a village called Santa Rosa which is rich in wildlife. Just before you reach their community, there are a lot of lemon trees and papaya crops. One of the members of this group is Elida. Elida is 40 years old and her business is selling food such as chicken soup, beef soup, fish stew, barbecued beef, barbecued chicken and 'mole de pollo' (spicy chicken). Elida is happily married to 42-year-old Fernando who grows corn and papaya. The couple have two children: 13-year-old Emmanuel and 9-year-old Tania. She tells us that her children are the reason she works hard day after day. Elida tells us that she has a restaurant called 'Las Delicias'. She says that she used to sell groceries and used her profits to set up a stationery store. With the profits from her stationery store and her grocery store, and with the help of Fundación Realidad, she managed to open her small restaurant and buy ingredients for making meals. Elida requested this loan to buy more ingredients for making her meals such as green chilis, dried chilis, tomatoes, onions, garlic, oil, chicken, beef and fish. She is very happy with the support that Fundación Realidad are giving her which helps her to fulfill her dreams of expanding her business. The members of this group are: Anastacia, who sells fish Edilia, who sells fish Flora, who sells fish Florencia, who sells ice lollies Elida, who sells Mexican snacks Erendira, who sells sewing supplies Antonia, who sells groceries Máxima, who sells Mexican snacks Juana Lorenza, who sells Mexican snacks Ninfa, who sells fish Rosa Luz, who sells clothing Juana, who sells fish Eloina, who sells clothing Martha, who sells clothing They are all grateful to Fundación Realidad for the support that they have given them in growing and improving their small businesses.