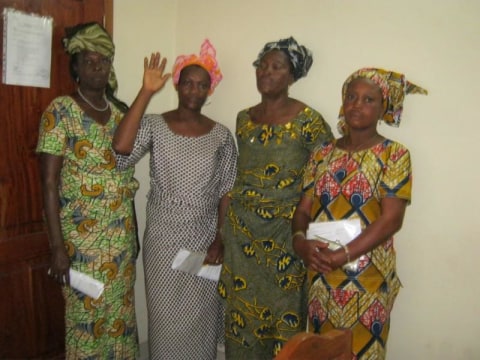 Mahouvivi 1 Group's loan finished fundraising, but these other borrowers need your support

A loan helped to buy cosmetics.

Mahouvivi 1 is a group of four people who live in the same district. The representative of the group, Andréa Elise (whose hand is raised in the photo) is 35 years old and married to a man called Franklin. The couple has two children, who are both at school and in their care. Andréa Elise went to school very little. She lives with her children and husband and they cover the various household expenses between them. For almost eight years, Andréa Elise has been selling cosmetics on a door-to-door basis. She gets her supplies from a market in Benin. It is the fifth time that Andréa Elise and the other members of the Mahouvivi 1 group have requested financial aid from Alidé, with a view to strengthening their working capital and businesses and responding to customer demand. The previous loans that they have been granted have been repaid in full.