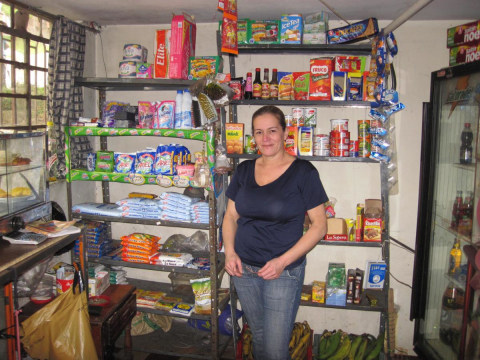 A loan helped to buy products such as cold cuts and groceries to increase the variety of products she sells to her customers.

Blanca is a person who has had the ability to get ahead and continue progressing with her son, despite the adversities that life has presented to her. Blanca is a single mother and head of household to her seven-year-old son, whose father abandoned him some time ago and who always has been Blanca's motivation for working hard in her business. Because of the need to generate income to support the expenses for herself and her son, Blanca set up a general store where she sells all types of staples. In addition to this, she serves food on one side of her store. In this way, she guarantees the monthly income for her household, with which her son can enjoy a good quality of life. With the objective of supplying her business, Blanca looks for a loan that will give him the possibility of buying products such as cold cuts and groceries to increase the variety of products she sells to her customers. Blanca hopes that in this way her monthly income will increase considerably so she will be able to fulfill the requests of her customers that previously she could not fulfill for lack of capital. In addition, Blanca hopes that with greater income her child will be able to enjoy a better quality of life and a better education. Blanca's dream is for her store to grow, and she also dreams about separating her store from the restaurant, to give her customers better service and in this way also create jobs.