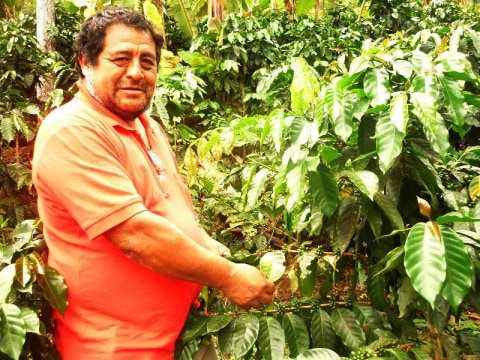 A loan helped to buy several sacks of organic manure.

Walter, 58, joined his life to Esperanza, the mother of his two children. They live in their own house in Yapaz Bajo, San Luis de Shuaro-Chanchamayo District. His main economic activity is farming. This is how he raised his two children who he refers to with much pride because they inherited his occupation. n his 15 years’ experience growing coffee and bananas, he learned how to invest and distribute his money well. Now, with much pride he states that he’s one of the best farmers in the area. He sells each harvest of ripe coffee beans to a very well known production firm in the area obtaining good profits this way. He was able to set up a grocery store in a small space at home where he sells basic staple items. He also has a small carpentry shop where he manufactures furniture and other products made from wood. Now, he wants to improve his business so that he can rest in his old age. This would be loan #5 received thanks to MFP. He commits once more to make his installment payments. He enjoys being part of his “El Palomar al Éxito” communal bank because all its members are responsible, very mutually supportive people. If Walter were to receive your support, he will use the requested money to buy several sacks of organic manure to fertilize his coffee plants that will be harvested starting in May.