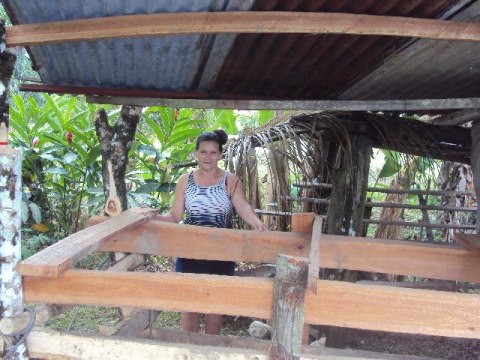 A loan helped to construct a farrowing pen and buy pigs, feed concentrate, and vaccines.

Señora Irma Rosa developed her business of raising pigs for retail sale in Costa Rica, in the province of Puntarenas, Palmar Norte, Jalaca, a zone with one of the lowest indices of human development in the country, according to the latest statistics contained in the State of the Nation 2011. This situation means that in the face of the difficulty of finding a paying job, the women need to become their own employers. In the case of Irma, she had already participated in her first loan cycle at a Banco Mujer. Upon moving to Jalaca, she continued with this business, but it presented the drawback that, given the limitations of her capital, she was not able to construct a farrowing pen, which is a space inside the pigsty where they put the recently born little pigs once they are being fed by the mother pig, because the little pigs can't be in the space with the mother pig all day because they run the risk of being crushed by their own mother, as has already happened. Thus there is an urgent need to do this construction, as well as to have growth feed concentrate, since at this time she has sixteen little pigs that need this food to be able to achieve adequate growth. At the same time, they need vaccines to protect them from diseases. The goal that Irma Rosa has set for herself is to be able to have three sows, so that in this way she can be taking some thirty little pigs to sell every six months, which will permit her to make the monthly loan payments, capitalize her business, and be able to help support her household.