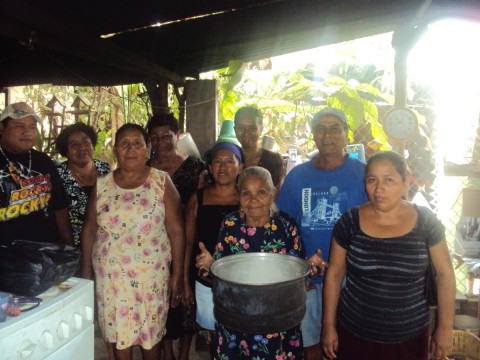 A loan helped to buy ingredients to make food.

This group is named Costa Brava and is made up of ten hardworking, modest people who want to improve themselves and make their small businesses grow. One of the members is Inés María, 40, who works selling Mexican snacks such as red enchiladas, green enchiladas, "sopes" [thick tortillas with toppings], taquitos, and "guisado" [stew] tacos. She sells beef broth with vegetables and chicken barbecue. She is happily married to Francisco Javier, with whom she has five children for whom María Inés works, because she wants to give them a better future and for them to be proud of her. She requested the loan to buy more ingredients, such as green chiles, dried chiles, chicken, tomato, vegetables, oil, salt, and lard. The other members of the group are Clemencia, who sells Mexican snacks; Beatriz Gertrudis, who sells clothing; Norma Magolirios, who sells grocery merchandise; Sixto Ricardo, who makes furniture; Evarista Flora, who sells clothing; Josefa Rufa, who sells clothing; Julia, who sells shoes; Martina, who sells Mexican snacks; and Luis Javier, who sells fish. They thank Fundación Realidad for supporting them so they will have a better quality of life.