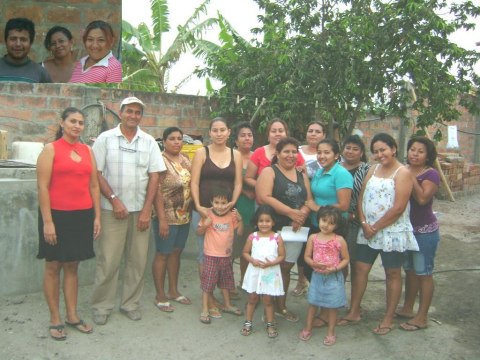 The Mi Dulce Hogar (My Sweet Home) Community Bank is formed of 13 women and 2 men who meet every other week in Las Cumbres in the city of Manta, a city known for its beautiful beaches that are very popular throughout the whole year, and also for being a city with unmatched beauty and a lot of tourist attractions.

This is a group of people who decided to get together some time ago to form this community bank, which has greatly helped them grow their businesses. For this reason they have requested a new loan. The other loan they received from the institution benefited them greatly as it helped expand their businesses and also improved their lives, both financially and within their families. They were responsible with the payments and only two people fell behind but later got caught up with their payments. The loan was very good for them and so they are borrowing again from the institution.

Mrs. Rosario is part of this bank and she has happily belonged for three loan cycles. She is 35 years old and in a common-law marriage. She has three children who are 14, 12, and 8 years old and they are students-two in high school and the youngest in primary school. He husband works in sales.

She will use the loan for her husband's business selling fruits and vegetables. Every day he gets up very early to go to the Manta wholesale market to buy his produce. He then works selling all over the city on his own tricycle. He already has certain zones where he sells and he has a lot of customers. He has been doing this work for 7 years and it is going very well for him.

This loan is for buying fruits and vegetables. Her dream is to buy a car for the sales.

The small attached photo is of one man and two women who, for reasons of work, could not be present when the group photo was taken. The three children in the photo are children of two of the women.