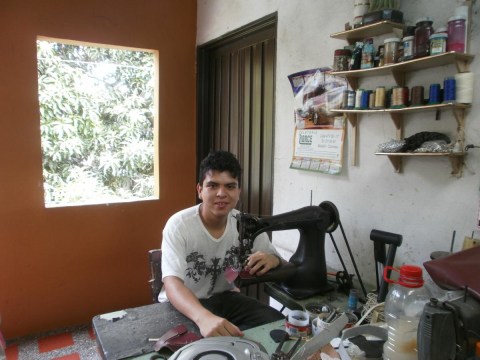 A loan helped to purchase materials for making footwear including rubber, glue, and soles among other items.

"Enterprising" is the best word for getting to know Miguel Angel, an 18-years-old who has already set up his own business and who works doggedly with a zeal for getting ahead. Miguel Angel learned how to make footwear some time ago, thanks to his father who taught him when he was very little. That's why Miguel Angel chose this business, with the desire to generate his own income, help out his parents, and make financial progress. In addition to working in his shoemaking workshop, Miguel Angel is a university student which has brought him great knowledge. He hopes that it will prepare him so that in the future he may access a very well-paid position. In his shop Miguel Angel has very good contracts with businesses to whom he supplies the results of his labor, and so he hopes in the future to have a very good income. With hopes of being able to deliver an order to a customer on time, Miguel Angel needs to purchase supplies for making footwear, such as leather, glue, and soles among other additional supplies. However Miguel Angel does not have sufficient capital to purchase these supplies, since his customers pay him only after all the merchandise has been delivered. Thus he hopes a loan will allow him the possibility of purchasing the supplies for his shop, such as rubber, glue and soles among other items, so as to continue delivering his customers their orders. Miguel Angel dreams of having his business be a large workshop with its own brand, and which also would generate many jobs. In addition he dreams that his business would bring him very good income so his parents wouldn't have to work anymore, and that they would have a better quality of life. Miguel Angel sees for himself a future as a great businessman, very well-known, and which would allow for many possibilities of employment for many persons in need.