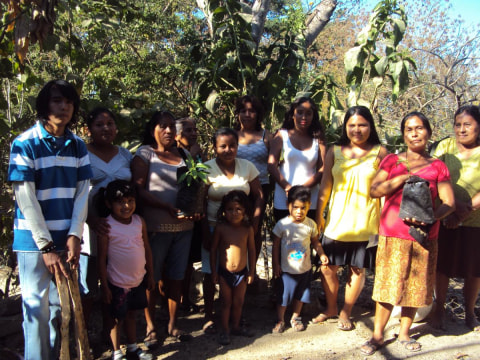 A loan helped to purchase chickens for selling.

This communal bank is named "Flor Margarita". It is comprised of ten hardworking people of Native Mexican origins who wish to improve their living conditions and their communities. They wish to provide a better life for their families and their fellow countrymen with their small businesses. All of the people in this group have dreams and faith in God, so to them, nothing is impossible. The leader of this group is Beda Sofía, a humble and hardworking lady with dreams that have yet to be fulfilled. She sells tamales with chicken and chipile, raw pork meat, chicken with pepper and garlic, clam and iguana. She is 40 years old and happily married to Martín, a hardworking gentleman who has been in bricklaying for the past two years. Doña Beda, as she is known to her fellow group members, reports that she also sells chickens, feathered, butchered or seasoned. She has been selling chicken for ten years and she enjoys to go out and make her sales in the afternoons. In the mornings she only sells at her home, because she needs to prepare lunch for her children. She has four children who help her sell chicken in the afternoons. Their names are Felipe, Ana Luisa, Andrea and Daniela. Her daughter Ana Luisa works at a drugstore and in the afternoons she goes to the neighboring areas to offer seasoned chicken. She also likes to sell chicken and help her mother, since Doña Beda has worked hard in order to make her children proud of her. She also sells medicinal plants. She requested the loan in order to purchase more chickens for selling. She comments that she would like to have a poultry farm so she can sell them by wholesale in neighboring villages. The other member of the group are: Magali Beatriz, who sells perfumes. Celestina, who sells food. Yessenia, who sells clothing. Alicia, who sells refreshments. Javier, who sells groceries. Margarita, who sells fresh fish. Adela, who sells clothing by retail and catalogue. Alejandrina, who sells groceries. María Luisa, who sells shoes. In the name of all members of the Flor Margarita communal bank, we thank the Fundación Realidad for helping people who wish to grow and improve living conditions for their families.