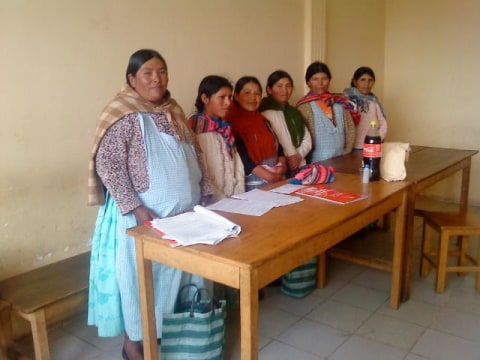 6 De Junio 2 Group's loan finished fundraising, but these other borrowers need your support

A loan helped to buy fabric.

The “6 de Junio 2” communal bank will start its first cycle in Pro Mujer as part of the Cascada focal center. It has six members headed by a governing board led by Amalia, the President. The members carry out a variety of businesses among which we have: manufacturing jackets and t-shirts, selling eyeglasses at wholesale, an oil store, carpentry, butcher shop and blanket weaving. Amalia indicates that she’s been working with Pro Mujer for a year having joined thanks to an invitation from one of the promoters. She currently has a sewing shop where she manufactures athletic wear that she’s had for several years now. The loan she’ll take out now is to increase her working capital. She will buy fabric in La Ceja and once made will sell them in street markets. This way of working allows her to generate income to support her family since she’s married and has four children. When asked what she likes about Pro Mujer she answers that it’s the teamwork.