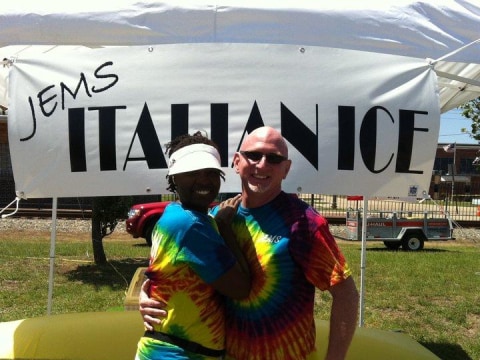 A loan helped To purchase a trailer for storage and transportation.

Contributing to her family’s vending business, Eunice found herself happiest. Before owning her business, Jems Italian Ice, Eunice worked as a chemist in a research institution. She also added, now that she is married, she could not go home after a hectic day of work and expect to have some alone time. Then one day a friend, who was selling Italian Ice in Atlanta, suggested Eunice do the same. After she found it was profitable, she said she “went in it full force.” The small business, composed of family and friends, began when she lost her passion and felt the need to exit the corporate world. Eunice’s family worked festivals for five years now as she helped them annually. As she recalls, working festivals gave them an opportunity to have conversations with 1000s of people. What attracted her the most to festivals were mainly the “loving people and atmosphere.” Eunice was raised doing community work and decided to do this and serve people in the community while having fun selling Italian Ice. Eunice will use the loan money to purchase a large trailer for storage and transportation to save money on renting trailers. As a traveling vendor, Eunice noted that in order to participate in 2012 festivals, which normally begin in March, she needs to register in December. From here, she needs to begin booking hotels and planning trips. She told of how Italian ice differs from traditional ice cream. Italian ice has “fresher ingredients and is made with finer ice so it almost melts in mouth,” she said. She juggles eight flavors that change according to what customers like. It would have taken a year and a half to collect the amount of money needed. The loan from ACCION Texas allowed her to skip that process and dive into applying for festivals and ordering supplies. She can now attend large festivals instead of many smaller ones. For more information on Eunice, Jems Italian Ice and nutritional information, visit the website: www.jemsitalianice.com.