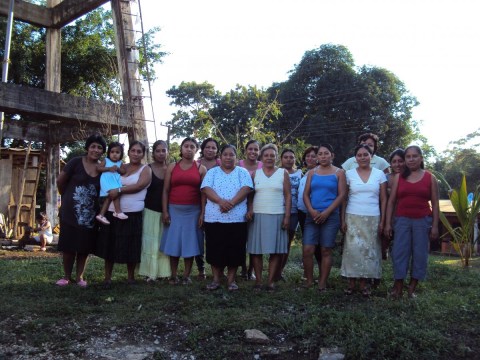 Las Limas Group's loan finished fundraising, but these other borrowers need your support

Doña Gloria is one of the members of the group "Las Limas," which consists of 16 people. This group is located in a community which is characterized by its warm climate, since there are many trees on its outskirts, principally rubber trees. Doña Gloria is 49 years old. She studied up to the high school certificate level, and she is married to Don Juan, who works as a day-laborer. She has three children, but now only the youngest, Alan Emilio, depends on her. He is 16 and goes to preparatory school. Doña Glora is a very hard-working, happy, and chatty woman who, more than 15 years ago, with the support of her husband, opened a little grocery store in her home with the idea of helping her husband a little with the household expenses. With the passage of time, her business has been growing and providing more. She says that she and her family tend to the business, which is open every day from eight in the morning until nine at night, and she always likes to have even just a bit of everything so that her customers always find what they need and thus are encouraged to come back to buy from her. She needs this loan to invest in the purchase of rice, beans, soup, oil, bleach, soap, sweets, toilet paper, sugar, coffee, salt, and soft drinks to restock her business and continue with her sales. Doña Gloria hopes that with this loan her business will continue growing, since she wants to support her son so that he can study for a career. The other members of the group are: Abel, who sells bread; Georgina, who sells beverages; Maria, who sells handicrafts; Antelma, who sells handicrafts; Dulce Maria, who has a nutritional club; Leonor, who sells cosmetics; Lidia, who sells tupperware; Maribel, who sells chicken; Jeny Damaris, who does catalog sales; Nieves, who sells confectionery; Nidia, who sells shoes; Irene, who has a mill; Martha, who has a home-style restaurant; Nayrobi, who has a bakery; and Zulibet, who sells groceries.