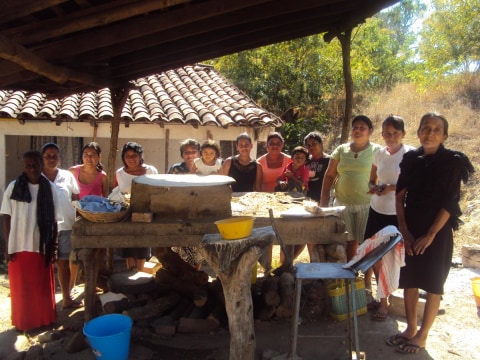 A loan helped to purchase corn to make tortillas.

The Tututepec ("The Almond Trees") group, and the members decided to give themselves this name because it identifies with their community, traditions and customs. They say that in their community there are many almond trees, and they provide a lot of shade. The group consists of 13 women with a desire to work and help their fellow townsfolk and their families. The representative is Catalina, who makes a living making hand-made tortillas. She says that what she likes most about her business is getting up early to wash her corn and returning to the fire to make big and tasty tortillas. Cata, as she is better known by her fellow members, has dedicated herself to this work for two years. She has two children: Emanuel, 9; and Jose, 5. She is single and has a strong desire to move up in life while being both mother and father to her children. She is requesting the loan to purchase corn to make her tortillas The other members of the group are: Eustaquia, who makes a living selling Mexican snacks. Catalina, who also makes a living selling Mexican snacks. Elizabeth, who also does the same job. Aidé, who sells groceries. Elizabeth, who sells raw materials. Floriberta, who sells snacks. Francisca, who also sells snacks. María, who sells fish. Alejandra, who also sells Mexican snacks. Balbina, who also does the same job. Bertha, who sells desserts. Sandra, who sells Mexican snacks. They are thankful for the support you have providede so they can make headway and triumph in life.