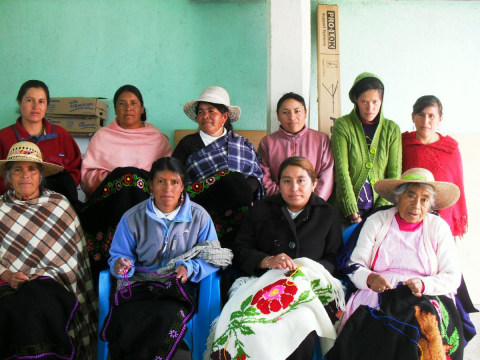 A loan helped to buy fabric for embroidery.

The group "Artesanas del Fresno" is made up of women who are hardworking and responsible. They chose the group's name because almost all of them are artisans who make crafts like embroidery and knitting - so they called themselves Artesanas [artisans], and Fresno is the name of their community. Maria Juana is an older woman who is very familiar with the origins of embroidery and knitting in the community. She is 69, widowed and lives alone but very close to her children and she spends most of the day with her grandchildren. Maria Juana says that the wool used to all be natural, but now it's synthetic. They used to make it themselves, first washing the lambswool then making linen with the well-washed wool. They used a wooden instrument to obtain the wool. Afterwards they knitted all of their wool threads until they had fabric, and finally they dyed the fabric - the most common colors were black, brown and gray. Things have changed now and none of this is done the same way because the fabrics are of very bad quality. She has been doing embroidery for 30 years, since her children were young. She says that it helped her to put them through school and also with their household costs when her husband was unemployed. She used to sell her embroidery every Monday in Ixtlahuaca, but now she only offers them to people she knows in her community. She is alone and often can't cover the costs of her basic necessities like food, clothing and shoes, which is why she works. This time she has asked for a loan to buy colored wool, fabric and needles. Her challenge is that her work is not as valued as it used to be and people don't want to pay a fair price. She says that it's very old-fashioned and it takes many days to finish a piece of work because everything is done by hand. She makes vests, bags, blankets, and sweaters with local figures like parrots, stars, flowers, etc. One of Juana's goals is to sell more embroidery so she can buy corn, because if she doesn't, she won't have corn to make her tortillas all year, which is one of the foods she eats every day. All of the members of the group are very thankful for the loan because they can buy the materials that they lack and meet their back orders. Angelina, Leonila, Lucia, Gregoria, Rufina, Rosio and Maria Lucina will invest in embroidery; Maria de los Angeles and Juana Iriais will invest in cosmetics.