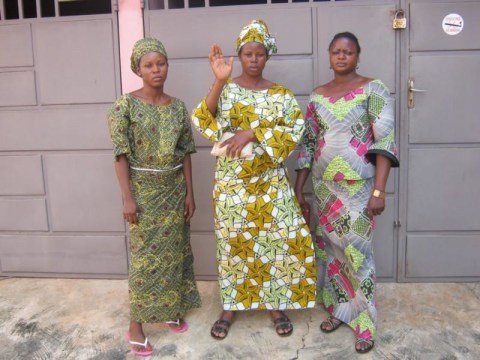 A loan helped to buy coolers and plates.

The MAHUSSI group is composed of three people who know one another because of their businesses. It is the third time that this group has asked for financial aid from ALIDé, in order to raise the level of their business activity. The leader of the group, Dossi Gisèle, is the one with the raised hand in the photo. Dossi Gisèle is 29 years old and lives in Bénin. Dossi Gisèle did not attend school. Dossi Gisèle is married to a driver named Justin. The couple has four children all in school and in their care. In addition to their children, the couple has another child to support. Dossi Gisèle lives together with her husband and their children. In order to handle the diverse family expenses, Dossi Gisèle has sold coolers and plates for four years using the distribution system. Dossi Gisèle stocks up in Togo. In the quest for client satisfaction and to increase her turnover and income, Dossi Gisèle seeks together with the other members of the MAHUSSI group, a third loan from ALIDé, The first two loans were properly repaid.