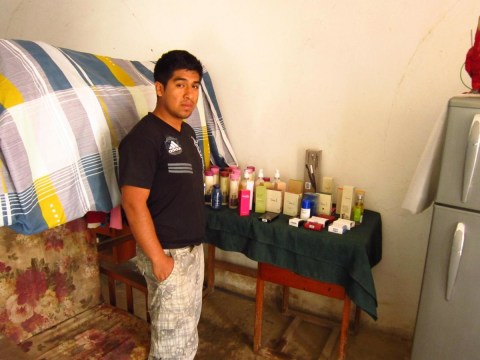 Alejandro Jesus's loan finished fundraising, but these other borrowers need your support

A loan helped to build an oven.

Alejandro is a young, single, 19-year-old man who sells beauty products (perfumes and soap). He also works oven baking chicken, turkey, etc. This is a secondary occupation which he learned from his father. Alejandro is a hard-working, determined, very tenacious man who has a great desire to get ahead in life. He has been working in his beauty products business since 2008 and earns 180 soles a week. He will invest the loan that he receives thanks to Kiva in expanding his small business, so that he can bake birds and other things, by building a small horno artesanal (literally: an artisan's oven - these are most often made from clay, brick or stone) which will provide him with facilities and, of course, a lot more income. One of Alejandro's dreams is to study for a degree so that he can become a great professional and, over time, enjoy a better type of life. His loan officer believes him to be a good client and believes that he will make his loan repayments on time. Alejandro lives and works in Chinca, Chincha Alta, Perú. Chincha is named after its early Chincha culture. The Chincha were celebrated for their advanced knowledge of agriculture and their maritime prowess. Today Chincha is an incredible mix of cultures, with a large Afro-Peruvian population, indigenous people and influences from the Spanish empire. The city, along with others near the Pacific coast, was damaged during the 2001 and 2007 Peru earthquakes but it has been preserved as it has been for much of its history.