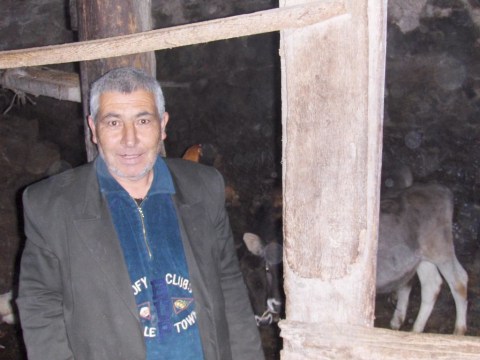 Gagik's loan finished fundraising, but these other borrowers need your support

A loan helped to buy fodder for his farm animals and to buy a number of sheep.

Gagik, age 50, lives in Ddmashen village in the Sevan area with his mother, wife, son, and daughter. Gagik’s mother is a pensioner and his wife is unemployed. His daughter is a nurse, but at present she is working as a shop assistant. Gagik’s son is a student at the Gavar branch of Yerevan State University. Gagik himself graduated from Yerevan water conservation technical school, and after that he worked at different organizations. Now he is a pensioner. Since 2010, Gagik has been engaged in farming. On his farm he has four cows, two calves, and 20 chickens. Part of his agricultural produce (milk, meat, and eggs) he sells to his neighbors. Gagik’s wife helps him a lot and thus they provide for their family and pay for their son’s education. This is Gagik’s third loan from Nor Horizon and he has never been delayed in his repayments. Now he is asking for a 1,000,000 AMD loan in order to buy fodder for his farm animals, and he will also purchase a number of sheep, which will allow Gagik to develop his farm and to increase his family’s income.