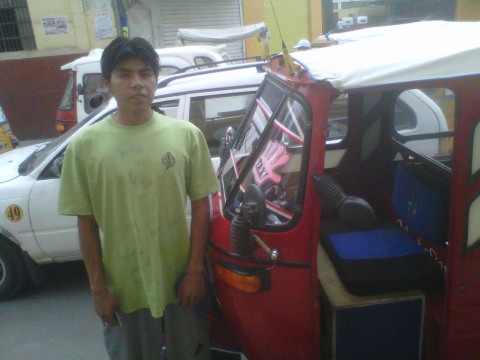 A loan helped To pay for general maintenance for his motortaxi.

Luis is 21 years old and single. He has a transport business and chose this line of work because he enjoys talking to people and believes this business is very profitable. Luis lives and works in Ica, Perú. Ica is located in the Sechura Desert about four hours south of Lima, the country's capital, and is hailed by Peruvians as "The Land of the Sun." It is known in Peru for its frequent earthquakes (an 8.4 in 2001 and 8.0 in 2007), its production of grapes, asparagus, and olives, and perhaps most notably, as the source of Peruvian's traditional national drink, Pisco. In this hot, arid climate we find the client's home and business. Luis is a very responsible, hard-working young man who wants to get ahead. He began his business in 2007 and earns an average 315 PEN per week. The 1,000 PEN he receives from KIVA will be used for general maintenance of his motortaxi. Luis would like to have his own long-distance taxi business some day so he can give his mother a better lifestyle. She suffers from diabetes. Luis is considered to be an excellent borrower who makes his loan payments on time.