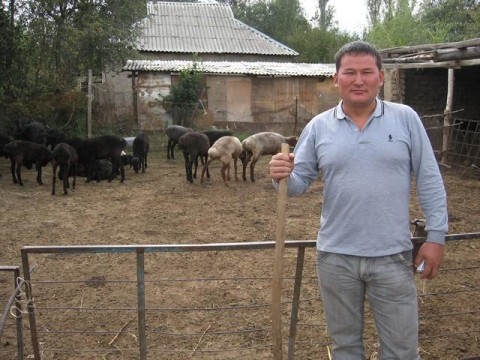 Baktybek's loan finished fundraising, but these other borrowers need your support

Baktybek is a native of the Kum Aryk village (Panfilovsky region, Chuyskaya oblast, Kyrgyzstan). Baktybek was born in 1980 to a simple farming family. From childhood Baktybek, the older brother of two sisters, helped his father care for the animals and dreamed of having his own farm in the future. After high school, Baktybek studied at an automotive technical college to be an agricultural equipment driver, and then settled down at a local farm as a tractor-combine operator. A year later, Baktybek's father died of an illness. This was a difficult time for him, as he became the only man and provider for the family; his mother did not work anywhere and his sisters were still young. Having worked on the farm for several years, Baktybek decided to go abroad for work. For a few years, he worked in Almaty (Kazahstan) and in Moscow (Russia) as a security guard, driver, construction worker and other jobs that did not require an education. Baktybek sent his earnings home and his mother bought cattle and got her daughters married. In 2010, Baktybek decided to get married. In this year something unfortunate happened- his mother died. His wife helped him survive this loss, who became his support in everything. Baktybek resolutely decided to raise livestock and at this time, thanks to his perseverance, Baktybek has 2 dairy cows, two bulls and 30 heads of sheep. His monthly income from selling milk and dairy products is around 10,000 som. In order to further increase this amount, Baktybek has turned to Bai Tushum and Partners to request a loan of 100,000 som to buy dairy cows. Later Batybek plans to increase his amount of livestock and dreams of building a big home.