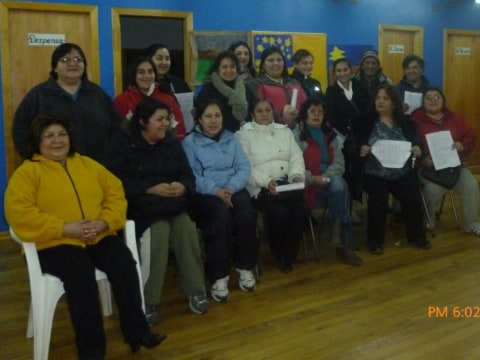 A loan helped to build a "quincho" [thatched barbecue area] where her customers can eat their meals and to get an industrial oven.

This communal bank is named Llauquen. There are 20 entrepreneurs who work in the areas of preparing traditional food and selling clothing and perfume. All of them live in the city of Castro. Nilda is a member of the communal bank; in the photo she is in the middle of the group, in the third row from the bottom, wearing glasses. She works preparing and selling traditional food in the southern part of Chile. Among these dishes are "milcao" [potato pancakes], "chuchoca" [potato bread], "empanadas" [meat pies], homemade bread, and "curanto" [clambake]. She has been in this business for 14 years, and she uses her home to prepare the food. She has a gas stove, a wood-burning stove, a dough spreader, pots (metal cooking containers in the shape of a half-sphere and generally with two handles), and pans. She says that her schedule is totally flexible and that the season of highest demand is during the summer, since there are many traditional festivals and fairs. Generally she buys her ingredients in the supermarket, where the prices are better, and in this way it has gone very well for her. She will use the loan to build a "quincho" [thatched barbecue area] to offer her meals in the same place, so her customers eat the food right there. Nilda also wants to get an industrial oven for her meals, since she also works in rendering, which consists of killing and later cooking a pig and other food in a cauldron to make lard. She lives with her husband and two children, ages 19 and 17, who help her advertise her meals and attract new customers. One of her dreams is that one of her children will finish studying, since in that way there would be better job options. She also would like to travel throughout the country to know some places. Nilda is very happy and grateful for the services granted by Fondo Esperanza, since she can count on capital that will allow her to invest in her business. She also enjoys the communal bank meetings with great happiness and affection, since the group is united and supportive. Castro is the capital of the island of Chiloé (the biggest island in South America), in the region of Los Lagos, in the south of Chile. The natural landscape is conserved almost totally without human intervention. It also has a culture rich in myth and tradition. The "palafitos," structures (houses) built on wood pilings on the shore above the ocean, are one of the greatest attractions there.