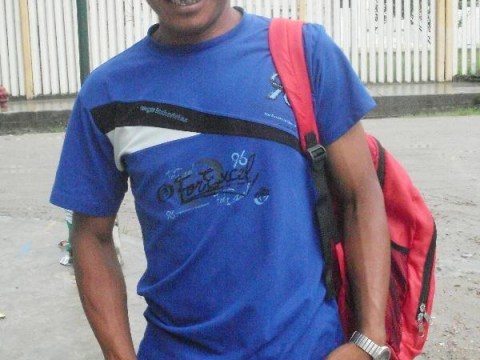 Olin's loan finished fundraising, but these other borrowers need your support

A loan helped to buy coffee plants and 10 sacks of fertilizer, and to hire temporary workers.

Olin is 22 and a young father. His girlfriend is Yeny, who is 19. Together, they have a one-year-old son. Olin still lives alone in Pumpuriani, in his own home. Olin was smiling and happy when he told us that he started working in agriculture when he was very young by growing corn, plantains, yucca, and coffee. Coffee was what supported his family and offered them limited luxuries. Olin also works some in construction and repairing highways. His contracts for this work are for 3 months at a time. He works operating equipment on other pieces of land. "At first, I was unfamiliar with the rise and fall of coffee prices, for example, in October, it always lowers, to between 5 and 6 soles per kilo. But in April in climbs to 10, 11, or 12 soles." He describes one of the biggest inconveniences of this work as having to face the weather conditions. In the future, he would like to marry Yeny and take the reins of his family. To do that, he should establish and fix up his home to receive them. In this way, both of their families will feel comfortable with their marriage. Thanks to your help, Olin will be able to obtain his sixth loan with Microfinanzas Prisma. With it, he will start to fulfill his projects. Olin is satisfied with his communal bank. He feels that he can reach his goals more quickly as part of a group. With this money, Olin will be able to plan coffee between his plots of plantains. He will buy coffee plants and 10 sacks of the necessary fertilizer. If he has enough left, he will pay workers to help him with this project.