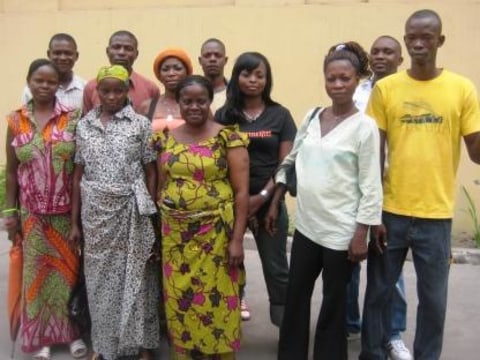 Mabondeli Plus Group's loan finished fundraising, but these similar borrowers just need a little more help to reach their goals!

A loan helped to diversify his business by adding a game business for children to generate additional profits.

Peter is the leader of the Community Bank “Mabondeli Plus,” which is composed of 11 members united in solidarity to receive loans from Kiva through MFI HOPE RDC with the goal of developing their businesses. Peter runs a telephone booth that sells prepaid cards, and he is a money changer in his area located east of Kinshasa. He began his business in 1993. With hard work and determination, his business has prospered. Peter is now well known and liked in this area. He has already received six MFI HOPE DRC loans and fully repaid them. Since that time his business has prospered, and the loans he has received have helped him rent a well-located business place. He makes $20 of profit each day. Peter intends with the next loan to diversify his business by adding a game business for children and generate additional profits. His dream is to have a transport company in his area. He is 28 years old and single.