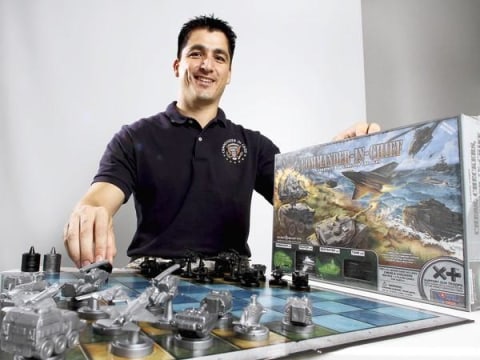 A loan helped To purchase raw materials for production of the board game.

Ten years ago, when Paul was a student at the University of Michigan, he came up with an idea for a board game. The game is similar to chess, but more advanced and with a military theme. Knowing that it was a creative idea, Paul took the project to a major gaming company which rejected his concept. After being rejected, Paul put the game and ideas aside and forgot about it all until a few years ago. Today, he is working to make “Commander in Chief” one of the most popular household games. He has jumped many hurdles to get the game where it is, and it has had some great successes. Paul gave copies of the game to military groups and military bases then donated a portion of each sale to the Armed Services YMCA. Paul recognizes that he did not anticipate the challenges that he would face in starting his own business for the game, including business plans, trademarks and financing. The costs to create the game were extensive, and to start meant hiring lawyers for patenting, graphic designers to help design the game, and raw materials for manufacturing. While several investors were interested in funding "Commander in Chief", Paul turned them down knowing that he didn’t want to split up his company. That being said, he was ineligible for a traditional bank loan and was directed to Accion USA. Paul will use the loan to purchase raw materials to manufacture the game, as its demand is growing. "Commander in Chief" can be found as a product of Sears, and is being sold at The American History Museum of the Smithsonian. Check out the website here: http://www.commander-in-chief.com/