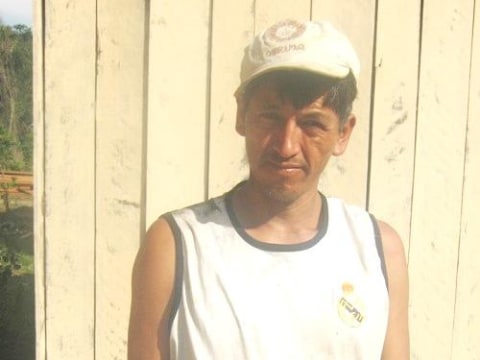 A loan helped to purchase wood for the construction of his home.

Alfredos is 33 years old and lives with Maritza who is 22 years old and with whom he has 2 children. Together they live in their own house, located in the community of Nueva Forteleza (New Strength) in the district of Pichari. He is known for being a very enthusiastic and enterprising man, since from his youth he has been interested in working in the fields. Seeing that his neighbors were earning good profits cultivating cacao and coffee, he also decided to undertake this work. That is how he took advantage of the land that his father granted him, and since then he has harvested coffee and cacao and that has helped him to earn profits and use them for household expenses. He comments that in the beginning it was very difficult, but thanks to the help of his wife and some laborers he contracted, he succeeded in finishing his tasks in the field on time. Now, he has decided to expand the sowing of coffee and cacao. He feels content with the work he does, because thanks to that, he will finally be able to to construct his home, as well as give a good education to his children. This will be his first loan with MFP, for which he promises to be punctual with his payments. With the 1,000 soles that he is requesting, he will be able to purchase wood in order to start with the construction of his house.