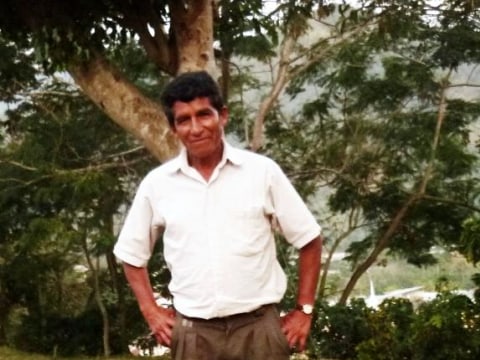 A loan helped to buy coffee and banana plants as well as fertilizer.

Francisco, 52, is a cheerful man living in his own house with his wife, Paulina, and two of his seven children who are the motivating force behind all his efforts and who he cares for in the indigenous community of Alianza. He feels happy about everything he’s accomplished to date; his children and grandchildren are his reason to live and work. The activity he’s involved in is growing bananas, coffee and citrus fruit. The extensive fields he owns have turned him into one of the area's main producers. He takes his products all the way to the city of La Merced to sell where he already has buyers waiting for him because his crops are very good quality. During times of good harvests the merchants actually come to visit him because they know about his good work. What he most enjoys is planting his fields; something he’s done with much dedication. He’s been in this line of work for 28 years and considers the most difficult part protecting his plants from infestations that can affect them. In the future, he’d like to buy new lands to expand production and continue with the work that he’s so passionate about: agriculture. He belongs to the “Alianza al Progreso” (Alianza toward Progress) communal bank and this is the second MFP loan where he’s willing to make his installment payments punctually; he’s already started to save up to do so. In addition, he gives thanks for the support provided. If Francisco were to receive your support, he’ll use the requested money to buy coffee and banana seedlings to renew his plantations as well as to buy natural fertilizer to spread among them later on.