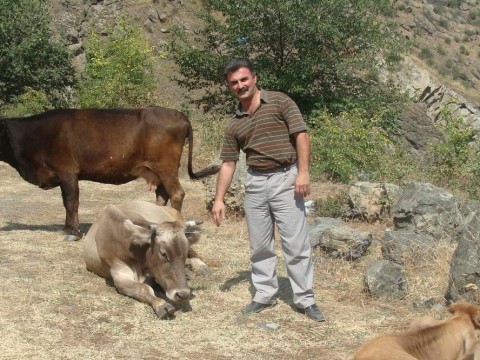 Shahen's loan finished fundraising, but these other borrowers need your support

A loan helped To buy 7 bulls and hay for his farm animals.

Shahen was born in 1956 in Baku, and received his bachelor's degree from Baku's Civil Engineering College. In 1990 he moved to Armenia and is living in Shgharshik town in the Syunik province. Shahen is married and has two sons and a daughter. Shahen's oldest son is studying to become a civil engineer at Kapan Polytechnic Institute, while his youngest son and daughter are still attending school. Shahen's wife is a teacher at the same school their children are attending. Shahen himself works at the "Health Preservation Fund" of the Syunik province. In parallel with his day job, Shahen raises cattle, chickens and grows fruits and vegetables for the local market. He then sells his products: vegetables, fruits, beef, milk and eggs to the re-sellers from Kapan's City Market. Shahen's wife helps him with his farm and their efforts allow them to provide for their large family. Shahen would like to take out a loan of 1,000,000 dram to purchase 7 more bulls for his herd as well as hey for them.