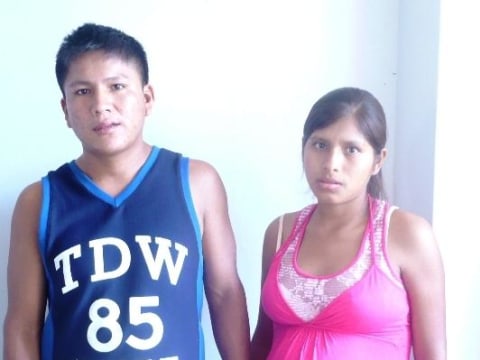 Jaime is 22 years old and from the community of Vista Alegre Baja. He lives with 19 year-old Elba and they are awaiting their first baby. Jaime, now more than ever, is ensuring that he works hard since he knows that his first child is on the way. He is therefore growing his cacao, coffee and pineapple plants with a lot of care. He has been working in this business since he was 20 years old, with the support of laborers. He says that he learned to work the land when he was a young boy and, thanks to his parents' instruction, he now works his own land. His most profitable product is his pineapples because they have enabled him to buy a motorcycle taxi which he provides a transport service with on his days off. The months of June through August are when he mainly sows his seeds. Jaime is turning to our financial institution for loans so that he can achieve one of his goals of sowing more pineapples. Jaime's plans include continuing to sow his crops and acquiring more land so that he can get ahead in life. This will be his first loan with MFP and he needs the support to carry out his plans. He pledges to make his repayments on time. Jaime will use his loan money to buy more pineapple seeds to start his sowing.