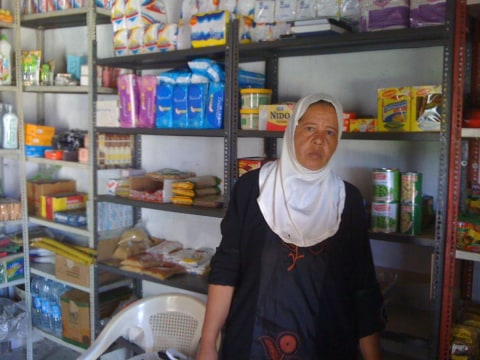 Wafaa's loan finished fundraising, but these other borrowers need your support

A loan helped to increase her store's stock before Ramadan.

Wafaa is a 48-year-old widow, living and working in Tyre. She has no children, and most of her family members are dead. She has been selling food and beverages since 2004 because after her husband's death, she found no one to take care of her and help in her living. Wafaa says life has been cruE. to her, since it took most of her beloved ones and left her alone struggling to fight for her living.

Because she had very little capital to start her business, Wafaa faced some obstacles. Wafaa is requesting her second loan from Al Majmoua in order to increase her store's stock before Ramadan.

Ramadan is Islam’s holy month. During the ninth month of the Muslim calendar devout Muslims fast from dawn until sunset. Ramadan originated during a summer month. The Arabic term “ramadan” (known in Turkey and Persia as “ramazan”) originally meant "the hot month," from ramida, "to be burnt, scorched." Based on the Islamic lunar calendar, however, the start of Ramadan passes through all seasons in a cycle of about 33 years.

Most of her customers like dealing with her to encourage her more and more to improve her way of life. With Wafaa’s previous loan she improved her business a lot and is hoping to do so in the coming days with her new loan.