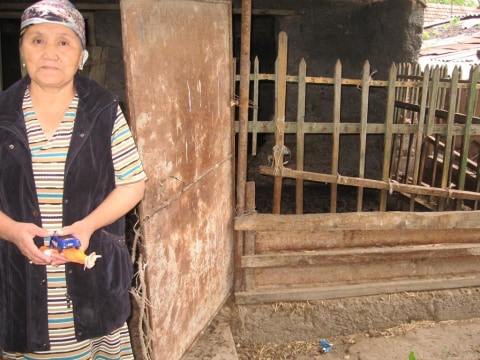 Tursun was born in Chorgolo village (in the Chuysky region of Kyrgyzstan). She is the mother of five children—two sons and three daughters. She is married and lives with her eldest son, daughter-in-law and grandson. Tursun was born into a simple farm family. Since childhood she helped her mother on the farm and like to do housework. After leaving school, she started work on the local collective farm as a milkmaid. In 1971, four years after graduating, Tursun married. In the beginning, she and her husband lived with his parents in Sosnovka village (in the Zhaiylsky area of Chuysky, Kyrgyzstan). Her husband worked on a local collective farm, and Tursun looked after their household. Soon the collective farm where Tursun’s husband worked allocated them a plot of land in order to build a home. Within three years, Tursun’s husband built a house, and after the birth of their first child (a daughter), they have moved away from his parents. They did not get a farm all at once. In due course, they acquired a calf and on ground allocated by the state they began to grow clover and barley. After a time, Tursun found work at a local cotton mill as a weaver, where she has worked more than twenty years. In due course, the family grew, as did the farm, which was expanded after the sale of some cattle at the market. In 2008 Tursun purchased a shop in the Bishkek – Osh road, and started to sell groceries. She is helped by her younger son and daughter-in-law. Now on Tursun’s farm there is one milk cow, one calf, two horses and twelve sheep. Tursun has applied to Bai-Tushum and Partners for a loan of 80,000 som (KGS) to increase her livestock. With her income, she plans to further expand the farm and to open a new shop. Bai-Tushum and Partners uses Kiva funding to target the especially vulnerable population. Bai-Tushum and Partners is one of the leading Microfinance Institutions in Kyrgyzstan. As a reliable financial partner, Bai-Tushum contributes to the economic development of the Kyrgyz Republic through the delivery of microfinance services in rural and urban areas that lead to increased employment and meet the interests of its clients and investors.