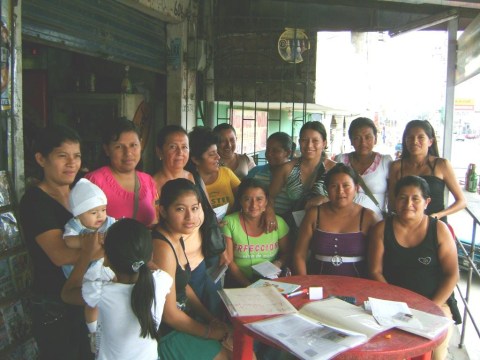 The communal bank "Las Palmitas" ["The Little Palms"] meets every fifteen days in the canton of Montecristi, which is known for its rich pre-colonial culture and for its handicrafts, which are recognized at the national and international levels. This is the place where the famous paja toquilla [or "Panama"] hats come from. This is a group of people who decided to come together, three loan cycles ago, and form this communal bank. It is very helpful for them, since with the loans they have been able to improve their standard of living and finance their businesses more effectively. Most of the members of this bank work creating handicrafts, above all paja toquilla products. Some are also involved in trade in general. In this place, we meet María Jesús, who is 33 years old. She is married, and from this relationship she has two daughters, aged 11 and 7, who are in elementary school. Her husband is an artisan. For her this is the fourth loan cycle in the communal bank. She likes it because of the help the institution gives its members. She is an artisan and works making and selling paja toquilla hats. She works every day, and she reports that it is a profession she loves, since her creations are not only part of a continuing tradition that is many years old, but also are admired in many parts of Ecuador and the rest of the world. She learned this profession from her parents, and they learned it from her grandparents. She has worked in this area for some 20 years, and she does it together with her husband, who also weaves hats. Once the hats are semi-finished, they are sold to businesspeople who arrive in the Pampas area to buy from the artisans and take the products to other cities. This loan is to buy paja toquilla to make the hats. Her dream is that her children will have a good future.