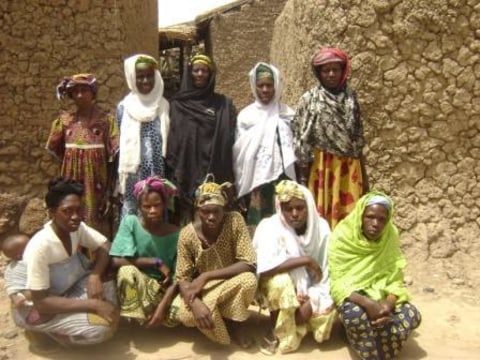 A loan helped to pay for agricultural inputs and manual labor.

The Kankeletigui 2 group is an association of married women from the village of Dembela in the Niena area, Sikasso Region (the third administrative region of Mali). The group is composed of 10 women. They live in traditional extended families, together with their children, husbands, in-laws etc. They average 33 years of age, with at least four children. They grow peanuts (ground nuts), rice and millet. In the desire to make their agricultural work profitable, the group members have decided to join the Soro Yiriwaso credit program. The present loan will be use to purchase a sufficient quantities of peanut and rice seeds, pay the cost of manual labor, buy small tools and agricultural inputs at the ig market of Dembela and of the city of Niena. After the winter harvest, the produce is stocked away for a while until its value increases, and it is then sold at the big market of Niena and at the nearby markets , retail (often wholesale) for cash to customers usually coming from big cities. Fanta plans to buy one bag of urea and two bags of complex fertilizers as well as to pay the cost of manual labor and weeding. [S]he envisages achieving a monthly income between 30,000 and 40,000 West African Francs, which will be used to repay the loan interest and cover everyday family expenses.