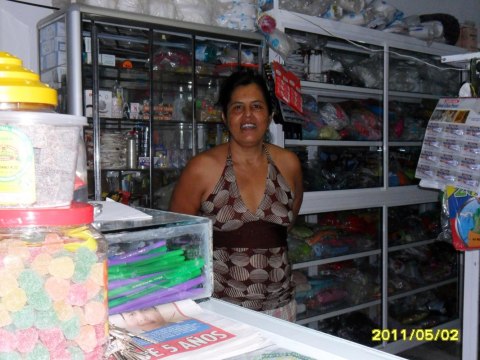 Lilia's loan finished fundraising, but these other borrowers need your support

A loan helped to buy stationery supplies for cash and in larger volume.

Lilia is a 53-year-old woman who sells stationery, toys, clothes, medicine and aprons in general. She’s married and has five children ranging in ages from 16 to 34. Lilia is a woman with much risk capacity in business, she says. Since 1992 she’s been working in various businesses. First she sold chicken in restaurants. In 1993 she had rented a restaurant and went into food sales. In 1994 she started a business selling merchandise, especially shoes that she’d bring from Bucaramanga and when her husband started working for a firm they opened a store. They bought display cases that they stocked with a variety of products displaying them well, a business that today she runs with a profit margin no less than 7% selling paper goods, school supplies, natural remedies, toys, accessories and home decorations. Her customers are primarily her neighbors that she sells to for cash. She also has a select group of customers that she sells to on credit. Her Kiva loan is the second loan she’s gotten from Fundación Mario Santo Domingo. She will use it to pay cash for a large volume of stationery supplies, which is the merchandise with the highest turnover rate. This will mean a higher profit margin for her thanks to the discounts she’ll get paying cash. Since getting her first loan she’s managed to regularize her business in the municipal Chamber of Commerce. Now her goal for later on is to add a restaurant specializing in the food of Santander to her store and to continue running her household with the dream of seeing it prosper more each day.