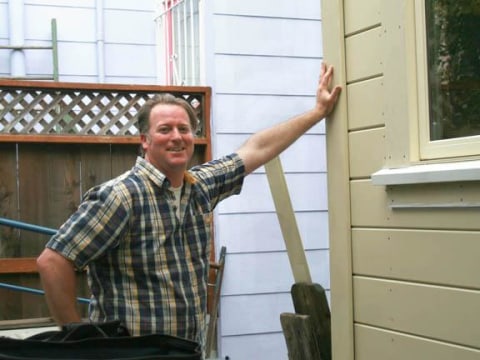 In 2007, Caleb was working as a subcontractor in charge of 8 to 12-man construction crews working on a wide range of residential projects. When the real estate bubble burst, he like many in the construction industry went from having more work than he could handle to no work at all and his license as a contractor went inactive. Now, Caleb is ready to start working on big projects again, but this time as his own boss. “When I was working for general contractors, they weren’t even around most of the time. They’d leave me in charge of the crew and occasionally check in on the progress, but I was doing the work.” Caleb has never taken on debt, which, until recently, seemed like a good thing. However, because he avoided things like credit cards in the past, Caleb hasn’t built up a credit history. Not only does this make it difficult to secure a bank loan, but also a contractor’s license. “Before the recession, [to secure a license] they’d look at your performance and if there were any negative marks on your record. Now they look at your credit score, and if you don’t have a credit history that license gets a lot more expensive,” explained Caleb. When Caleb asked his bank for a small business loan to help him cover the costs of the license and insurance, which would allow him to take on a crew and larger jobs, they weren’t interested in providing the small amount he needed. Instead, the bank referred him to his local microlender, Opportunity Fund, where he was approved for a $3,500 microloan. With the loan, Caleb successfully secured his license, bond, and liability insurance. These three key elements will now help him grow his business. When asked if he had any favorite project to work on, he listed everything from elaborate door systems in Maui to decks in Marin County to old Victorian-style homes in San Francisco. “I love being able to see the improvement; to look at what I’ve done compared to what was there before. I like all the jobs I do, now that I think about it.”