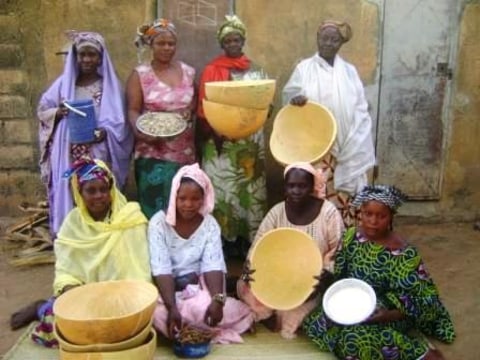 Djama Kanou Group's loan finished fundraising, but these other borrowers need your support

The eight members of the Tièssiri group all married group, mainly living in monogamous families. They are on the average 36 years old, with three children, and all live in the Médine district in the town of Ségou (the fourth administrative district of Mali), and they know each other as neighbors, relatives as well as through their common commercial activities at the Médine market in Ségou. The group members sell local juices, potash, ginger, powdered baobab fruit and gourds. In the goal of meeting the ever growing dcustomer emand, they joined Soro Yiriwaso and are now on their 6th solidarity loan. Mrs. Kadidia D. sells powdered baobab fruit at the Médine market in Ségou. She plans to use her goal to purchase 500 kg of powdered baobab fruit. She stocks up in the villages of Dougabougou, Binguebougo and Guassola. She resells out of her home and at the Médine market in Ségou. Her customer base is composed mainly of women. She sells for cash and on credit. She hopes to achieve an average monthly income of 26,000 West African francs, which will be used to provide for her children’s needs and contribute to some of the family expenses.