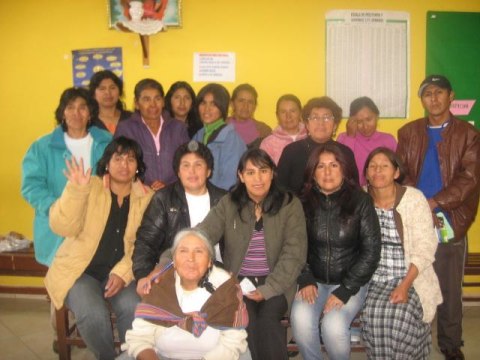 Kusi Killa Group's loan finished fundraising, but these other borrowers need your support

A loan helped To purchase sheep's wool, dyes, and firewood.

Blanca is the president of the Communal Bank “Kusi Killa”. She is 35 years old, in a common law marriage, and has five children (ages 18, 16, 14, 9, and 5). Blanca and her husband have a workshop where they produce woven crafts in the famous neighborhood of Santa Ana, the home of artisans from Ayacucho. Her husband learned this traD. from his grandparents. Blanca and her husband previously maD. altarpieces, but they started weaving because there was more demand for these products. Now they focus on completing their orders.

The loan she is requesting will be invested in the purchase of materials such as sheep’s wool, dyes, and firewood. Blanca is participating in her second loan cycle with FINCA Peru. She was invited to join by a friend and enjoys being able to save. Blanca has learned much from the training classes she has taken and likes spending time with the other members of her Communal Bank.

Her dreams incluD. growing her business, exporting her products, and seeing her children become professionals.