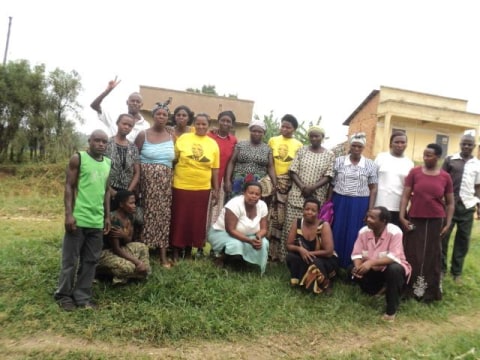 A loan helped to purchase more cloth to make clothing.

32-year-old B. Ellias is affiliated with Burema Women's group-Kihihi. He has been doing tailoring for the past two years in Kihihi Town. Ellias who is happily married with two kids says he got apprentice training on how to sew clothes from a tailoring school in Mbarara which is a neighboring town. He says the skills he learnt had to be put into practice and at length he established his own tailoring business. Before all this, Ellias was tending to his farming gardens from which he harvested crops that he used to resell later. He still maintains his farming source of livelihood, saying he is able to supplement with profits from his tailoring business the little he gets from selling his crops. Weekly this business generates shillings 80,000. He says with this loan, he is going to purchase textiles for making clothing. He says he will be able to make more clothes to resell once he buys the textiles.