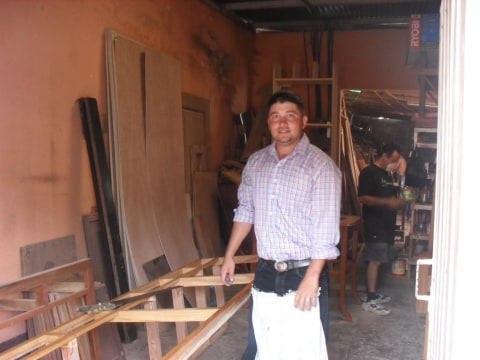 Cruz Enrique's loan finished fundraising, but these other borrowers need your support

A loan helped To buy two oxen to help him plow his farmland.

C. is 26 years old and is a native of Concordia, a district located in the city of Jinotega. He is single and is a carpenter and farmer. He only completed up to his first year of secondary school because he didn’t have a job and couldn’t continue paying for his studies.

He began working with his father when he was 12 and later went on to work as a carpenter at a company where they paid him 120 Nicaraguan Córdobas (NIO) and provided him with food. He worked there for a year until the company relocated to another area, so he left that job and decided to become independent. He didn’t continue his studies because he would have to walk a half an hour every day to reach the school. In addition, he had to help his father provide food for the family every day. Later, he specialized in building and his experience in farming allowed him to create his own business.

He is requesting the loan to purchase two oxen to help him plow his farmland so that he will have his own oxen and will not have to borrow them from other people. This way, he can have better crops and grow onion, beans, and cabbage.

He hopes that with this loan, he will be able to expand his business and buy tools like a chain saw to sharpen his carpentry jobs. He wants to have a workshop where he can make all types of furniture by giving work to other people and having his crops progress.