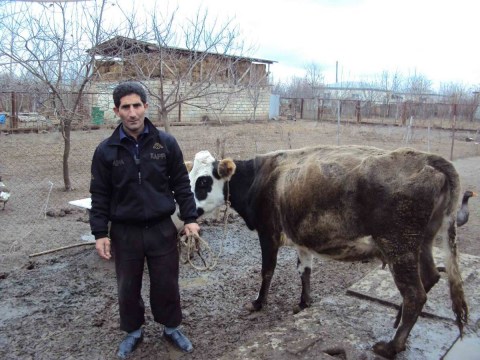 Sirac's loan finished fundraising, but these other borrowers need your support

Sirac A. is a 45-year-old man from Bilasuvar. He lives with his wife and four children who are from 23 to 8 years old. Sirac has three daughters and one son, who actively helps him in his cattle-breeding business. He has been engaged in this line of business since 2002. This is the only source of income for the family. Sirac is a good client based on his history of repaying his previous loan from AqroInvest. He requested his second loan of 2000 AZN from AqroInvest and Kiva to invest more in his farming. He bought four more cows and thanks to that, the income of his family increased up to 400 AZN per month. Now Sirac has seven cows, but after repaying this loan he would like to take out another loan to buy five more cows.