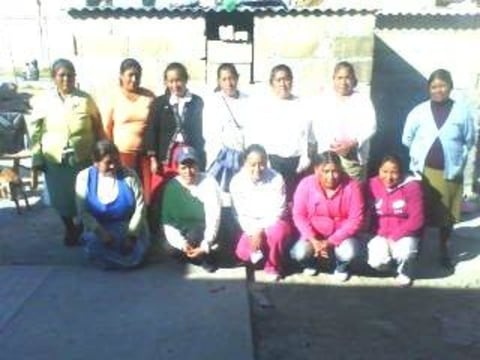 A loan helped to buy shawls.

This group is called Flores de Dolores (Dolores’s Flowers). It is located in the community of Dolores Hidalgo in the state of Mexico. There are 12 people in the group. 44-year old Paulina M. is one of them. She completed sixth grade of primary school, is a businesswoman, and has four children, two girls and two boys. Paulina earns her living buying and selling shawls, a job she’s been doing for eight years. She is seeking a loan to buy more shawls which she sells in the nearby towns. The shawls are part of the traditional dress worn by local women. Paulina is happy right now because she has the money to invest in her business. The loan will be used to buy more shawls so her store is well-stocked. At the moment of taking the photograph, Sra. Adela García bent down, but all the group members appear.