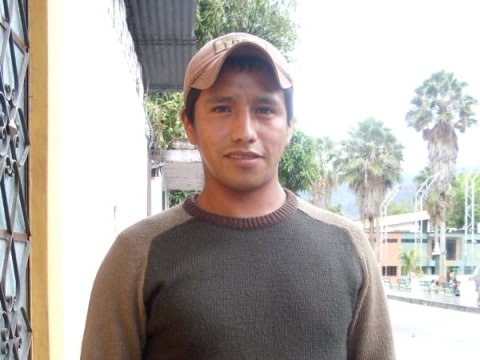 A loan helped To buy sacks of organic fertilizer.

Cristian is 24 years old. He is a single and hard-working man who, together with his mom, works hard to get ahead in life. He and his mother live in their own home in the community of Sanchirio (central Peruvian jungle). At his young age, Cristian has many ambitions. He started farming 4 years ago since he tells us that his parents had taught him farming techniques since he was a boy. He recently acquired his own plot of land where he grows bananas and coffee. He has good harvests since the money that he used to invest in renting his land is now invested in caring for his crops, looking after them constantly. For this reason the cooperative in his community buys his coffee beans for a good price. However, Cristian's aspirations are to study the use of heavy machinery. This is Cristian's first loan with MFP and he is grateful for the opportunity which his community bank has give him since he says that he now has the support to achieve his goals that he was previously lacking. He plans to invest his loan in buying several sacks of organic fertilizer - potassium and guano (animal excrement) which he will spread on his coffee and banana crops.